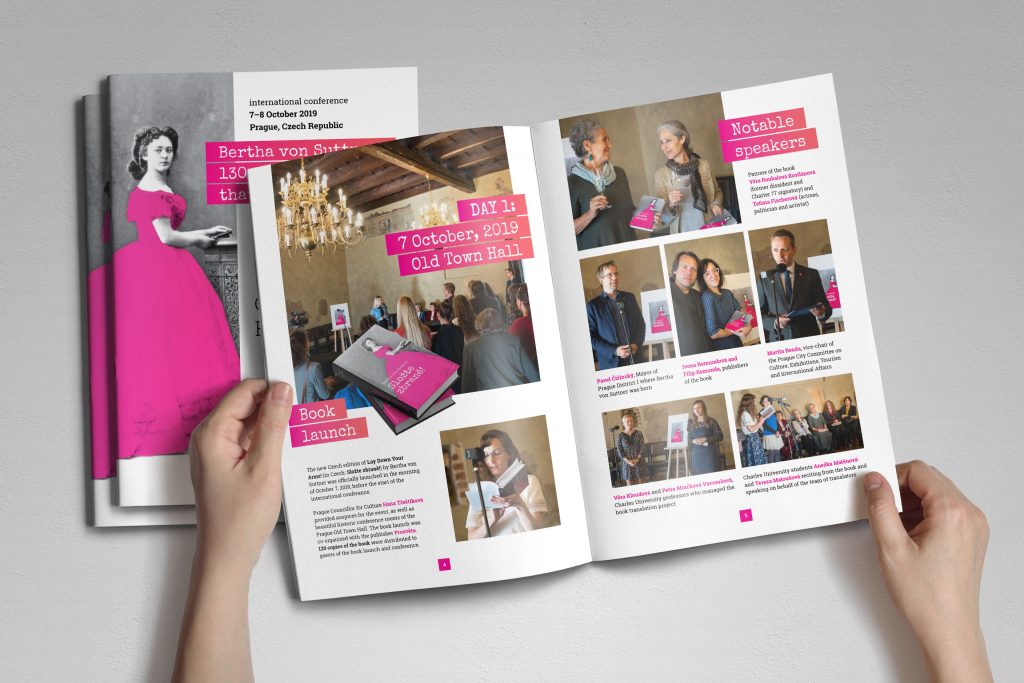 Bertha von Suttner:
130 Years of Ideas that Don’t Get Old

Did you know that the first female Nobel Peace Prize laureate was born in Prague? Her name was Bertha von Suttner. She was a famous writer and peace activist. Austrians have her on €2 coins. In Czechia, she was nearly forgotten. We’ve changing it! In 2019, we organized a modern Czech translation of her novel Lay Down Your Arms! and launched it at the Old Prague Town Hall during an international conference.

PragueVision hosts the European office of PNND – Parliamentarians for Nuclear Non-proliferation and Disarmament. PNND is a non-partisan forum for parliamentarians nationally and internationally to share resources and information, develop cooperative strategies and engage in nuclear nonproliferation and disarmament issues, initiatives and arenas. In October 2015, PragueVision served as the logistical host for the PNND Assembly in Prague.

PragueVision is a co-founder of UNFOLD ZERO – a platform to promote progress in nuclear disarmament through UN bodies and mechanisms. Established in 2014, UNFOLD ZERO coordinated events for two International Days for the Total Elimination of Nuclear Weapons (2014, 2015), promoted a joint statement of parliamentarians, mayors and religious leaders launched on the 70th anniversary of Hiroshima and Nagasaki bombings, and held a number of meetings at international conferences. In 2016, UNFOLD ZERO will focus on the renewed Open Ended Working Group on Nuclear Disarmament.

We explore and advocate for effective steps towards a secure world without nuclear weapons. We participate in international forums, engage with organisations and publish opinions and news in Czech language.